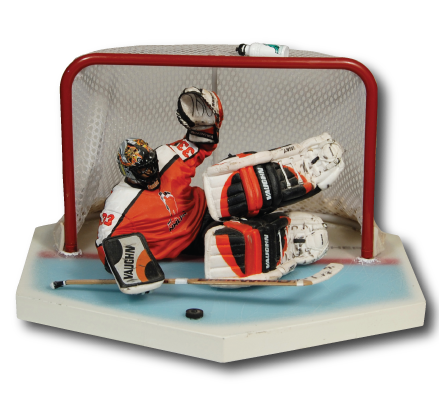 Brian Boucher, goalie for the Philadelphia FLYERS. This was the first sports figure I sculpted at McFarlane Toys from start to finish (except for the head, stick, skates, net and base), including the pads and gloves. About 9” scale, it was released by McFarlane in 2001. I also sculpted Martin Brodeur of the NJ Devils, and Jose Theodore of the Montreal Canadiens. These goalie figures were especially challenging because of the large jerseys and padding underneath, so it was hard to get the anatomy and drapery. We sometimes dressed someone in a hockey outfit and had him pose like the figure that was being sculpted.