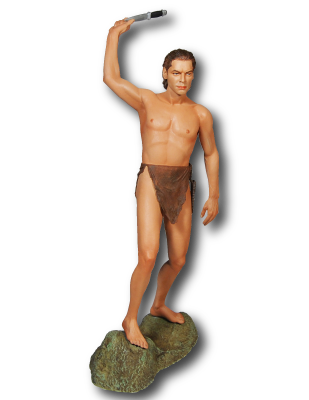 Tarzan, the iconic jungle man, as played by Johnny Weissmuller in numerous films throughout the 1930s & ’40s. Having grown up on these films, I was happy to have the opportunity to sculpt this commissioned piece. It is 1/6 scale and stands just under 15″, including the base. It was a challenge to capture Weissmuller’s unique physique. Since he was an Olympic swimmer, he was lean and I tried not to make him too muscular. I feel I have achieved his unique look and intensity as he is about to throw his knife. Completed in 2011.