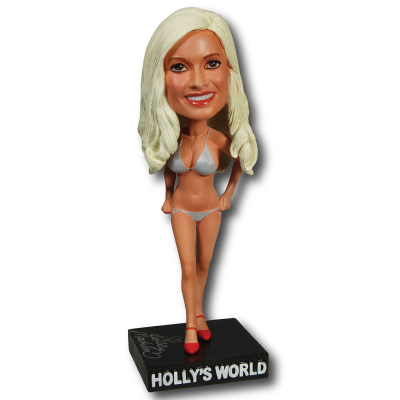 Playmate Holly Madison from her reality TV show “Holly’s World”. I was hired by the producer of the show, Prometheus Productions, to create a bobblehead of Holly Madison to replace the one of her in a baseball uniform she did not like. It was a lot of fun to make this and it appeared on the 7/5/10 episode of her show. The complete piece stands 7” tall, and I was able to sculpt, mold, cast and paint this within a month for their approval. Then, I produced 20 identical built and painted pieces (including the neck spring in each). The base was made by Oliver Brig and the nameplate was made by Fritz Frising.